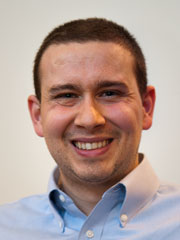 I currently hold a position teaching economics to the first and second-year students of Oxford College of Emory University. Prior to that, I taught as a Special Instructor at Colorado State University during my graduate school tenure. I have enjoyed both of these positions as they challenge me to improve both my teaching--where I focus on facilitating student engagement and retention--and research--where I focus on regional economic policy and development as well as labor market outcomes across space. After the 2019-2020 academic year, I accepted a tenure-track position at Oxford College of Emory University. I could not picture a better place to begin my career.

I grew up in Portland, Oregon and lived in the same house for my eighteen years with my parents and sister, Sam. My early hobbies focused on sports and extracurriculars. I still play basketball and have played baseball, soccer, and ultimate frisbee on and off. In most ways, I am a first-generation college student (as my father went back to school after working in the private sector) and so I did not know what to expect from the college hunt. Largely due to the proximity to home and beautiful campus, I chose to attend Gonzaga University in 2006 (basketball certainly played a role here). At Gonzaga, I participated in several programs, including the Honors Program and Hogan Entrepreneurial Leadership program. While I found many of my current passions and intellectual interests in these programs, selecting a single major became quite difficult as nothing stood out to me in particular. After remaining a general business major for most of my collegiate career and changing majors in between, I settled on the newly created Bachelor's of Science degree in Economics in my final year.

The end of college brought several difficult choices. In all honesty, I had never seen myself staying in a graduate collegiate environment, however many of my teachers suggested that I would be well-suited for a faculty career. At the time, I was working for a startup company named GreenCupboards (now etailz.com ). Here, I learned how to code in VBA in order to price our many products for sale. The job was rewarding and fun, so the difficult choice became whether I should stay, or continue to graduate school. Ultimately, I decided moving to academia was worth the risk and applied for graduate schools in the beginning of 2010. After taking the GRE a handful of weeks later, I was accepted to the University of Oregon and Colorado State University's graduate programs. The teaching opportunity and financial aid package from Colorado State fit my goals far better and so I moved there in the latter portions of the 2010 summer.

Shortly after arriving in graduate school, etailz.com sold for a significant sum, making my choice seem more costly (for my students, the opportunity cost SEEMED high, but was really a sunk cost). It was difficult early on, for this reason; however, I found myself completely fulfilled from teaching and interacting with students. It was in these moments that I began to feel something to which I could devote my life. I have always been curious and so finding an opportunity to learn along with my students seemed too great an opportunity to pass up. I call them "click" moments, those in which you witness a student truly understand the content you are teaching. It is these that I would not trade for any other career and I owe the teaching opportunities provided by Colorado State to my ability to realize how important they are to me professionally.

As I dove deeper into graduate school, I found myself drawn to economic analysis that could help people, through either policy or consulting opportunities. I settled on the two fields offered through the program that I found most fit those descriptions: Environmental and Regional. With two fields I felt could impact people meaningfully, I began my dissertation work, which I initially planned would use a Computable General Equilibrium model for use in policy analysis. Despite this intention, I found that my research questions at the time centered on labor market outcomes that required an econometric approach and so I set aside the CGE skillset in favor of a more cohesive set of thesis chapters. I finished my dissertation: Essays on the Relationship Between Compensation and Productivity–A Regional Analysis in the summer of 2017.

Today, I live in Atlanta, Georgia with my wonderful girlfriend, Brenna, and two amazing cats: Nero and Shia LaFluff. When not working on research or teaching at Oxford College, I often play pinball (The Hobbit, Theater of Magic, Batman 66, and Stern's Indiana Jones are among my favorites) and enjoy running, basketball, and craft beer. I am also an avid Dota 2 player, for those who know the esports scene (though as I get older it is clear that I my reflexes are slowing down).